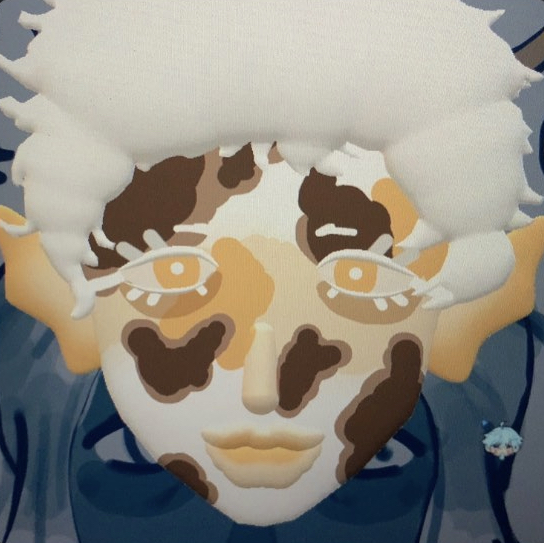 Kelan is a teenaged mermaid who lives in a suburban area of underwater Anaphis. Their family is upper middle class which consists of their parents, Praveen, a fashion designer, and Lahari, a stay at home parent.

Kelan is a delinquent choosing not to care about a lot of things, like their future. They're lazy and enjoy an indulgent life. They have trouble answering to authority which expands beyond their parents. This is mostly because of Kelan's blunt and to the point attitude with most things which in turn makes them an honest person. Kelan kinda has a vigilante complex and stands up for what they think is right, which doesn't always align with the mainstream. They wouldn't get into so much trouble if they actually had a filter to the things they say but Kelan barely cares about any consequences which may arise from their words.

Kelan has mostly bright white skin with orange and brown spots on the upper half of their body. Their back and lower body is mostly orange, and their tail is dark brown. They have bright white hair which they recently cut short because it was "annoying."

Kelan is a normal student at highschool. Kelan has awful attendence because they skip so often or they arrive reallly late and unsurprisingly, they don't get good grades. Outside of school, Kelan sometimes interns with their parent Praveen. Kelan isn't super into fashion but thinks it cool and their parents mostly wanted them to get some experience with a creative work environment. Kelan has a part-time job on a pearl farm where they cultivate pearls. Due to the nature of the job, there are on seasons and off seasons which fits Kelan's work style very well. They really enjoy their job but their parents want them to go into something more professional.

Kelan lives with their parents, Praveen and Lahari. Praveen was the one who and laid Kelan's egg, this means that for about a year after giving birth, Praveen was in a state of deep sleep recovery. Since Lahari raised Kelan for the first year, to this day, Kelan is closer with Lahari than Praveen. As parents they are very supportive and rarely strict. Kelan feels very comfortable when they're with them and has a lot of trust in them.

Kelan isn't interested in school friends but does like their co-workers. They don't hang out or anything but have a good time when working together. The only person Kelan does regularly spend time with outside of their family is Bermuda, a human who frequents the shores near Kelan's house. They show eachother parts of their own world and exchange lots of trinkets. Bermuda likes to bring Kelan coconuts and Kelan likes to bring Bermuda sea glass. They like to joke around and playfully bully eachother but they are pretty much inseperable, albeit one has to live in water and the other on land.

(Praveen does not approve of this friendship and belives the world of mermaids and humans should be as separated as possible. They think Bermuda, and the human world in general, are bad influences for Kelan, like how Kelan adopted pronouns when mermaids are all genderless.)

Biggest fear is jellyfish, even the harmless ones.

Diet: Has a pretty balanced diet. They enjoy land food a lot.