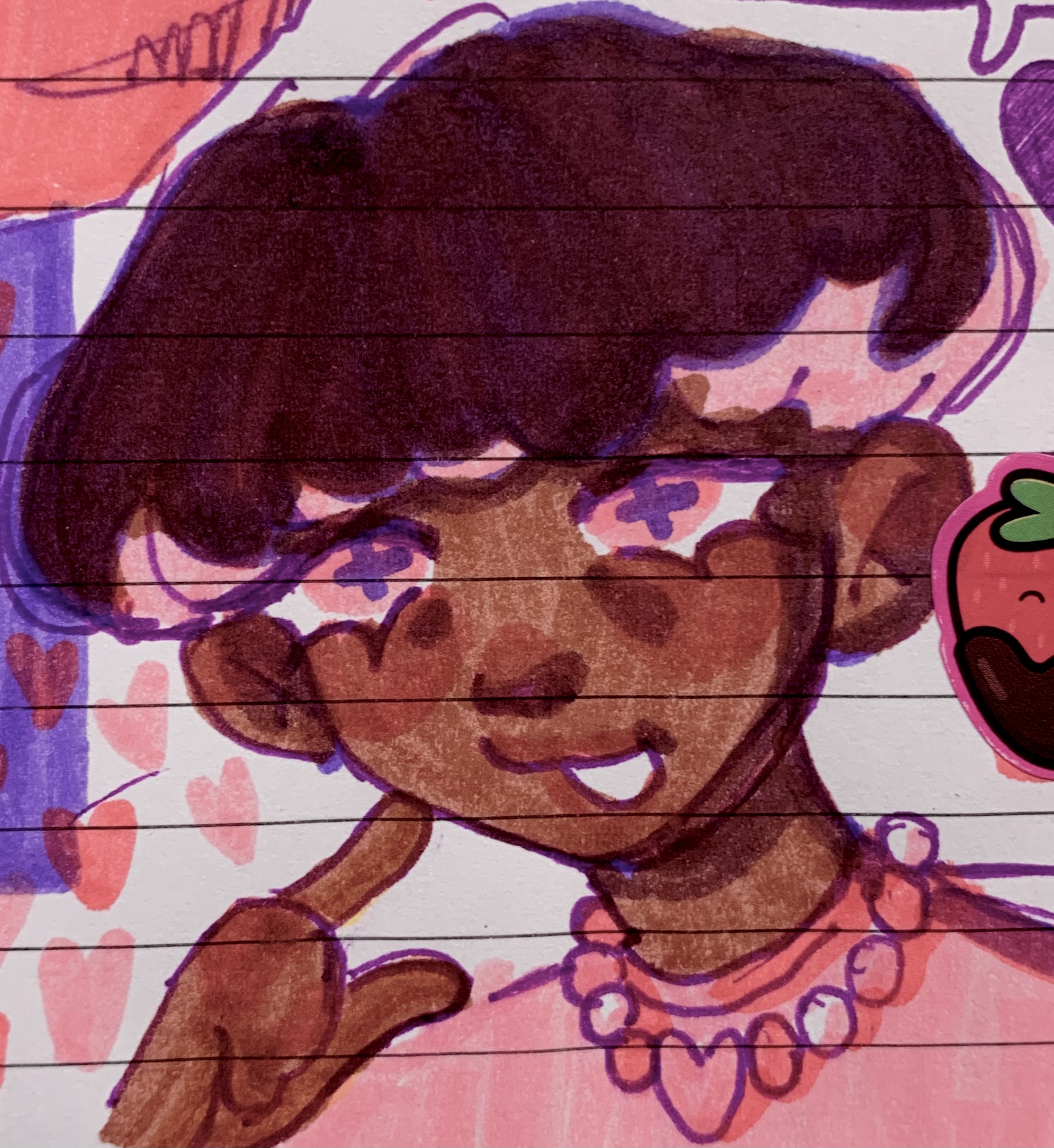 Euimiel lives in Aromis. After spending her early life on Banderbach Island Home for Orphans, she got adopted by a wealthy couple who live in the capital.

Euimiel is very sweet, kind, and gentle. It would be hard to hate her aside from one thing. She cries a lot. In the orphange, she cried so much that the attendants couldn't deal with her anymore. They put sleeping medicine in every meal they gave her and this made her too scared to eat. Euimiel wouldn't be able to tell you why she's crying or what would make her feel better and this frustrated everyone she shared a space with.

Euimiel has a small frame with dark skin and droopy pink/purple eyes. She has mostly dark hair with light pink hair, underneath which she keeps short. She likes wearing light colors, and flowery blouses and dresses.

Eui studies medicine at the Aromis Academy of Royal Occupations. This wasn't her choice, but her parents enrolled her. Euimiel is taking an accelerated course to make up for her years of inadequet education so she always has a lot of homework to do. She doesn't do too well at the academy. She understands her nursing and medicine but only in practice. She's not good with tests or memorizing names and she isn't good at her other general classes like writing, maths, history, or language. Most of Eui's time is spent studying which she has trouble managing with taking care of herself.

Euimiel didn't make any friends on Banderbach Island since almost everyone hated her and she still has trouble making friends after moving to the capital.

(Lots of backstory here) Euimiel ADORES Morgan. When they're separated for too long, she quite literally stops functioning. They met eachother on Banderback Island at the orphanage. Morgan was not an orphan but helped the orpanage workers for food. One warm day, the attendants had everyone eating outside and Morgan noticed that Eui wasn't eating her food so he asked if he could have it. Euimiel told him about how her food always makes her sleep and continued to talk about how she hated the orphanage and how everyone hated her. She felt very comfortable with Morgan and for the first time felt okay. Morgan continued to sit with Eui there on and they became best friends and then more like brothers. Morgan brought Euimiel some food when he could so she could feel safe eating something. The more Eui & Morgan spent time with eachother, the less Euimiel cried and she became more social and had more energy. The attendents noticed this too and welcomed Morgan whenever they saw him. He was like their saving grace. Morgan & Eui often sang songs together and this kept Eui calm. For about 2 weeks, Morgan stopped visiting the Orphans Home and Euimiel went back to how she was before but worse. When Morgan finally returned, the attendants let Euimiel stay with Morgan in exchange for an allowance. Euimiel enjoyed spending time with Morgan and vice versa so Morgan didn't mind sharing his space with her because she made him feel calm and helped him deal with his lonliness. Eui didn't mind the living conditions beccause she was with her brother who was all she ever needed.

Euimiel did not want to get adopted becuase she didn't want to be separated from her brother. When Salome & Palace arrived to adopt her, she opposed it as much as possible and said she would only leave if Morgan was going with her. The couple forcefully took her with them. Euimiel was miserable without Morgan. She cried 24/7 and expressed suicidal ideation. Palace argued that if Salome wanted a child so badly, they could at least adopt one that wouldn't be so troublesome but Salome was determined that it had to be Euimiel, so they went back to adopt Morgan as well. Euimiel did not open up to her new parents at all. Palace didn't pay any attention to them and Salome scared Eui. Salome would always say that she gave birth to Euimiel and even had baby pictures of Eui somehow. Euimiel hated the thought of Salome being her birth mother because she couldn’t wrap her head around how someone could put their own child through the hell she’s lived out of “convenience.“ Salome would get very angry when it's doubted or when they ask too many questions. Salome was very pushy, intrusive, and insistant. Euimiel hates her.

Euimiel's favorite thing to do is to make things for Morgan. She specializes in bead jewlery. She has easily made Morgan 200+ bracelets, necklaces, rings, & etc.

Diet: Does not eat a lot but loves sweets and fruit. Hates hates hates meat.